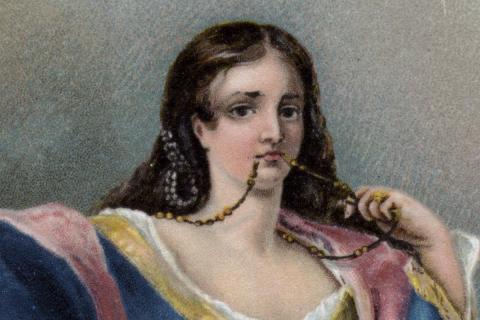 Both Shakespeare's poems belong to the widely spread late Renaissance genre of poems on ancient legendary historical or mythological subjects. However, along with the usual aesthetics of images and style for Shakespeare, he has a distinctly realistic interpretation of the stories. In "Venus and Adonis" tells the story of the unrequited love of Venus to the beautiful young Adonis, who prefers love to hunt, and her grief over the body of a lover killed by a wild boar. Shakespeare does not represent an abstract, dematerialized goddess, but a completely alive, in love and suffering woman. There is a lot of true passion and movement in the poem. Very true descriptions of nature, animals, details of hunting, clothing and appearance of the characters. From the sensual tones of this poem Shakespeare proceeds to the moral and heroic theme depicting the violence committed by the son of the last Roman king Tarquinius over his wife, which, according to the legend, served as a pretext for a popular uprising and the overthrow of the royal power in Rome. Shakespeare skillfully depicts in this poem the degrading effect on the soul of lowly passion and the suffering of offended purity. The tone of the poem is gloomy and pathetic, descriptions and analysis of emotional experiences, especially of Lucretia, are distinguished by subtlety and truthfulness. For the sympathy of the unfortunate victim of the criminal, the angry protest of the poet is felt against a cruel tyranny and violence over natural human feelings.

Shakespeare's collection reveals a strong Italian influence, in particular Petrarchism. However, here again the conventionality of the genre is reduced by Shakespeare to a minimum and the living content of passionate experiences and meditations is embedded in the traditional sonnet form. In the collection, you can distinguish several cycles that have arisen in different moments of the poet's heart life and are dedicated to the themes of love, friendship, tortures of jealousy, reflections on his fate, etc. The central image of the collection is a dark-haired beauty, cruel and treacherous, in which the poet's friend is also in love. After a great internal struggle, this rivalry ends in Shakespeare's soul with the victory of friendship. The poet's beloved and his sense of it are depicted in a very realistic way. He denounces her "callousness", curses her for making her a slave not only for him but also for his friend, calls his passion "an ugly illness", aware of all his physical and moral shortcomings and yet cannot leave her. In other sonnets, Shakespeare praises the nobility of his friend, gives him good advice, sadly speaks of the disdain that surrounds his profession in the society of the actor, resents the untruth surrounding him. Especially expressive in this respect is Sonnet 66, where Shakespeare calls for death, being unable to look at

The dignity that begs,
Over simplicity, a mocking lie,
A nonentity in luxurious clothes,
And perfection is a false verdict,
And virginity, blatantly rude...

A number of motifs and images of Shakespeare's poems find consistency in his dramatic works.

The style and genres of Shakespeare's plays, their themes and character changed depending on the time when they were written. We distinguish three periods of Shakespeare's creative work. The first is characterized by optimism, the dominance of a light life-sense, and cheerful tones. Here, first of all, there are a number of Shakespeare's cheerful and picturesque comedies, often painted with deep lyricism, for example, "Midsummer Night's Dream" (1595), "The Merchant of Venice" (1596), "Much Ado About Nothing" (1598), " (1599), "Twelfth Night" (1600), etc. Simultaneously, Shakespeare creates a series of his "chronicles" (plays on stories from English history): "Richard III" (1592), "Richard II" (1595), two parts of "Henry IV" (1597), "Henry V" (1599), etc. Although these plays often depict very gloomy and cruel pictures, yet they are dominated by faith in life ь, in the victory of a good beginning. The tragedies "Romeo and Juliet" (1595) and "Julius Caesar" (1599) also belong to this period. The first of them, despite its tragic plot, is written in light and cheerful tones and contains a lot of funny scenes, reminiscent of the simultaneously created comedies of Shakespeare.