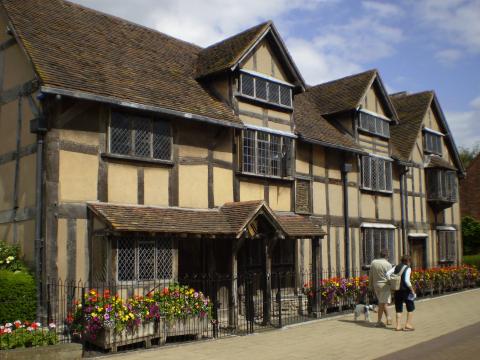 Monopoly granted king exclusive rights to sell any particular goods or any particular areas were common in medieval England. However, James Stuart was too openly to reallocate traditional monopoly in favor of their entourage who came with him from Scotland. It could not displease the British.

No, by God, lords and nobles do not allow me to do this; after all, if I got a monopoly on stupidity, they would want to take part in it, and ladies, too, will not let me alone to be a fool.

However, this passage preserved only in the lifetime edition of "King Lear", a quarto of 1608. In the text "Lear", presented in the First folio (1623), he is no longer perhaps for censorship reasons.

Different types of leather and products made of them are repeatedly mentioned in the plays of Shakespeare: he knows what kind of leather is used to make shoes, and some for bridles; knows that parchment made from the skin of lambs and calves, and violin strings from calf intestine; remember about these unusual varieties, like deerskin, leather, Fox or dog. Leather jackets, flasks, bags, frequent attributes of his characters.

Shakespeare's father was a glove maker and, thus, of a Tanner; his house was a workshop for the manufacture of skins, and Shakespeare was well known for their properties.

In the Middle ages, the Catholic Church strictly forbid the practice of usury: it was believed that to create money "out of time" means to deceive God, who gave it to everyone for free use. England stopped being a Catholic country under Henry VIII, and he, as head of the new Church of England was allowed to lend money to growth but with many caveats (so that all were satisfied). So, the borrower was "in good faith", "happy" to repay the loan and interest, and the maximum percentage that is allowed by the law, did not exceed the tenth shares. In the 6th sonnet, the Poet urges a Young Friend to marry and leave offspring a process compared with a commercial operation.

However, in this sonnet the Poet calls a legitimate profit is not ten, a thousand percent if married, my Young Friend is one will leave ten children. Generally, Shakespeare often used the language of commercial transactions, common in England for people of his position and prosperity.

The houses of wealthy citizens, hotels, taverns and other notable buildings were the proper names, sometimes replacing them the address. Most often, the house was called by some notable figure or emblem that decorated the pediment, stucco facade, etc. In "Comedy of errors", where the constant confusion with two pairs of twins, the names of the houses, among other things, help the audience understand who is on stage. Then on the second scene, the twin of the first, who is looking for his master, like two drops of water similar to of Syracuse.

The mention of two different homes tells the audience that of Syracuse mistaken for a local resident, to of Ephesus. Not only at home but even separate rooms in hotels could wear their own names. Thus, in "Henry IV", part one, the action often happens in the tavern "boar's head", and it has room Crescent and the Pomegranate room.