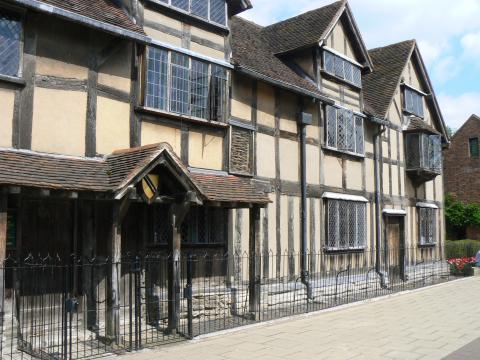 Customary to cover the floors with straw or reeds existed in England in the Middle ages and is made on visiting people repulsive. About him with disgust echoed Erasmus, who visited England in the early sixteenth century (and by the way, who stayed in the home of the Thomas more). A modern writer sums up the experience of Erasmus: "Floors, often made of clay, covered with a layer of roofing thatch, never change, content that sometimes lay on top some fresh. And will lie this twenty years, sheltering and warming someone's spit, vomit, urine, spilled beer, fish bones and heads, not to mention the other filth".

Reed or cane on the floor mentioned in other plays of Shakespeare, for example in the chronicle, "Henry IV", part one, in the scene representing the room in the feudal castle. The British got rid of this custom only in the XVII century.

In the Comedy "Much ADO about nothing" friends make fun of Benedict, noting that he, following the tastes of his beloved Beatrice, shaved his beard.

However, tennis, repeatedly mentioned by Shakespeare, has little to do with modern tennis (lawn tennis), which appeared in the second half of the XIX century.

Typically English short sword with a wide blade (sword or broadsword), and a small and lightweight round shape shield (buckler) was a sign of a man ignoble servant, a soldier or a Highwayman. Sir John Falstaff of the historical chronicle "Henry IV", part one the knight, but was going to Rob the helpless travelers, he is arming that way. Later, talking about the night encounter (from which he actually ran), Falstaff makes others proof of his valor (as it turned out, fake).

I have the jacket punctured in eight places, his pants in four; my shield broken sword, like a hand-saw.

At the end of the XVI century, the fights between the English nobles often took place in accordance with the fashion, imported from Italy: each of the opponents in one hand holding a rapier and another dagger. So arranged the duel in the finale of the tragedy "Hamlet". Knowing that he will have to compete in fencing with Laertes, Prince of Denmark is interested in the terms.

Interestingly, from the point of view of subsequent events, choosing dual weapons plays no role: the dagger and treacherously poisoned and sharpened sword will cause the death of Laertes, and king Hamlet. But Shakespeare wanted to be on stage not just the fight, but the fencing work of art created according to the latest fashion, and also to emphasize the nobility of his character.

In 1603, with the death of Queen Elizabeth, the Tudor dynasty ceased to exist. English throne the Scottish king James of the Stuart dynasty. He's got lots of surprised and annoyed by his new subjects; one of the reasons for scoffing over James was that he was to give the Scottish barons of the English Ducal title, which no one in Scotland wore. About 1606 Shakespeare wrote the tragedy of "Macbeth" in the Scottish story believed to be in favor with king James. The piece ends with the overthrow of the tyrant Macbeth and the accession of the rightful heir Malcolm.

Given the British attitude to this fact, it is not clear the purpose of the Shakespeare if he wanted to draw a parallel between the heroic times of Malcolm x and modern reign of James, or did not resist the temptation to give the audience once again laugh at the stranger king.