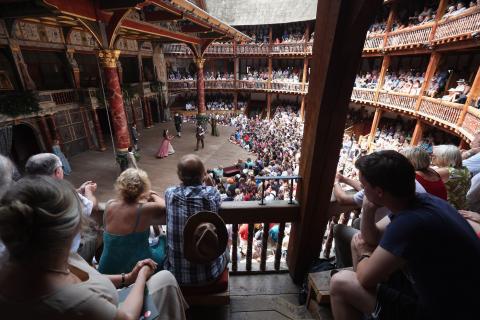 This custom, derived from France, was circulated not only in England. In Spain, for example, the toothpick was still a sign of prosperity: in a satirical Spanish poetry of the time often found the image of the impoverished nobleman, which people use a toothpick to show that just had a big lunch, though in fact, for a long time, forced to fast.

Yes, I know, merry Patricia, who is not a fool to drink a Cup of warmed wine, not diluted a single drop of Tiber water.

Shakespeare then blends the two tradition Roman and English. The Romans drank wine diluted with water, and the British loved the wine undiluted and heated. And they loved it sweeten, and for this purpose, to carry the sugar bags about this "Henry IV", parts one, says Prince Henry with Francis, tavern errand boy.

But the main connoisseur of booze Shakespeare, of course, is Falstaff. Despite the excitement and resentment, he is able with one SIP to distinguish good from bad sherry.

A plague on all cowards! Give me a glass of sherry, you scoundrel! Or is there more virtue in the land! Oh, you rogue! In Jerez again mixed with lime. What to expect from a scoundrel like not cheating? But still a coward of the worse circles of sherry with lime.

Here Shakespeare implies the custom of unscrupulous to mix the lime into old wine to take back a sour taste.

Medical beliefs of the Renaissance is largely still based on the teaching of Hippocrates about the temperaments. According to him, it was believed that in the human body contains all four elements in different combinations forming all things: air, fire, earth and water. Air and fire were considered the elements of light emanating from the soul; earth and water were elements of heavy, of them was flesh.

Hippocrates taught that the predominance in the body of the earth, that is "black bile", creates a melancholic nature, the media which is prone to brooding, loneliness, melancholy (as well as the training philosophy and the sublime way of thinking). In Shakespeare's time in England, the melancholy was considered fashionable, and in the character of Hamlet, he depicted the typical melancholic with all provisions of attributes monologues about death, black dress and a skull.

A severe plague struck London twice while living there, he added, 1592-1594 and in 1603 the years (actors suffered greatly from the fact that theatrical performances at this time were forbidden for sanitary reasons). How to deal with it, no one really knew, but extant medical recipes contain vinegar as a major ingredient. "Eat sorrel soaked in vinegar" says one of these recommendations. In the 111th sonnet, the Poet regrets his low fate, to earn his living, he is forced to depend on the opinions of the crowd (the situation is very logical for an actor and playwright).

The Latin word (here "infection") means both "infect" (hence infection in sonnet) and "paint", so the above the Poet complains that his craft left on it same print, like paint on a painter ("I'm stained like a Dyer's hand"). But did you use the vinegar to "wash paint", we do not know.

In the tragedy "Romeo and Juliet" the main character, deciding, along with his friends on a daring escapade to be at the feast in the house of the enemy of his family, old Capulet, refuses to dance, explaining that he had "a soul of lead" (Romeo has not yet met Juliet, hopelessly in love with the cold beauty of Rosaline).