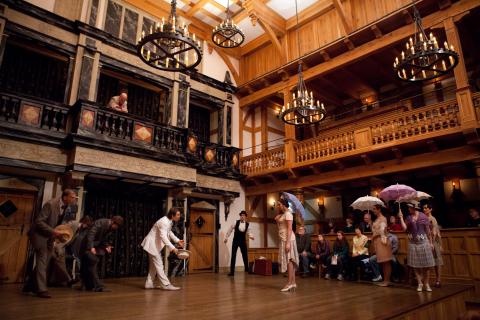 Shakespeare draws and major historical events such as the battle, the bloodiest battle ever on English soil (according to some sources, both sides fell more than 30 thousand people). English story reaches the peak of its confusion: as symbols of the colossal civil slaughter on the scene the son who killed his father, and the father who killed his own son. Crown several times passed from hand to hand. But as you know, in the end, "this sun of York cruel winter in the triumphant summer turned" supporters of White roses prevail and thereby clearing Richard Gloucester the path to power, which he so dreamed of.

It would be truly surprising if Shakespeare had not turned to the main myth of antiquity Homer's story about the siege of Troy. But the way he did, still perplexed scholars and readers alike.

In "Troilus and Cressida" are celebrated heroes: one side with Achilles, Agamemnon, Ajax and Ulysses, on the other Hector, Paris and Aeneas. But like Shakespeare, you have never seen. There is nothing heroic. Greek and Trojan leaders constantly quarrel with each other, they are driven by the conflict of petty ambitions. The ingenious Ulysses intriguing to pit the capricious and arrogant Achilles with the dull and arrogant Ajax. Agamemnon is worried only about his position. Elena frivolous and not worth her bloodshed. Ugly Thersites last words defy one and all. Brave Hector dies as a result of treachery. The war depicted by Shakespeare without embellishment, as a matter vile, dirty and inglorious.

Opposition to the war, at first glance, is the love of the main characters. Troilus and Cressida characters are not ancient, for the first time the story of their passion originated in the Middle ages. Shakespeare drew from it the eponymous poem by Chaucer, but, as usual, treated differently.

In the Prince Troilus reveals the character of Romeo, but this lover character will have to deal with Cressida that Juliet will not name. Rather, it is similar to those characters of Shakespeare's comedies, freely changing attachment, not seeing much difference between the objects of love. It is strange only that such a volatile character gets the female character, usually because of infidelity in love, Shakespeare is the prerogative of men. However, the relationship of Troilus and Cressida from the start compromised by the presence of Pandara typical Comedy pimp. In this play, actually a lot strange. But it will be interesting to read it: Shakespeare once again shows us its capacity for infinite variety.

This historical chronicle completes the second tetralogy of Shakespeare, but tells about the time earlier than the first. Henry V is the father of the Henry VI, for whose crown the barons entered the War of the roses.

The difference between the two reigns is not confined to chronology. Henry V the king - winner, successful in battle and in love. Later critics often reproached Shakespeare because he created the play agitation in favor of a king the symbol of national greatness, and the episode of the hundred years war battle of Agincourt a key event in English history.