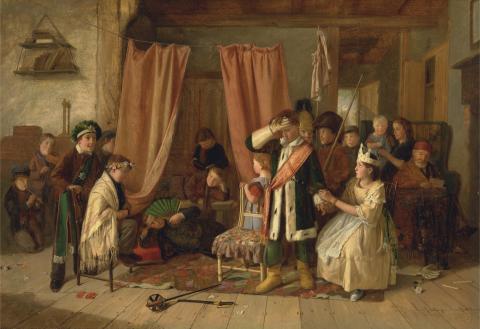 Play with severed body parts, a play written prose, play with the encyclopedia of seduction, immature plays, and other works of Shakespeare.

"Titus Andronicus" is one of the earliest of Shakespeare's plays. It is written in the genre of revenge tragedy, which partly converges with the future of "Hamlet" and the Roman theme puts the "Andronicus" on a par with "Julius Caesar", "Antony and Cleopatra", "Coriolanus". However, "Titus Andronicus" for the Gory details is far superior to everything ever composed by Shakespeare: fourteen murders (two of them of infanticide), one rape, two severed heads, three severed hands, cut off the tongue and it is not to mention the fact that one of the heroines bring pie stuffed with meat her sons.

Such a jumble of horrors consistent with the tastes of the Elizabethan audience at the time of Shakespeare "Titus Andronicus" was very popular, and one can only wonder that the playwright didn't take the easy route of reproduction of this kind melodramas.

However, this early tragedy is not without a distinct dramatic merit. Shakespeare had a quality sample: although in the case of Elizabethan tragedies of revenge to talk about the impact of the writings of the Roman poet Seneca, the author of Titus Andronicus focused on "the naive Hecuba" the Greek tragedian Euripides (her story twice remember the characters of this Shakespeare's play, unusually rich with quotations from the ancient classics). Shakespeare, like Euripides, to bring his hero to the limit of mental endurance, for which it awaits transformation into a monster. In Titus Andronicus until fall terrible misfortunes, until he meets another loss, not tears, and unnatural laughter, which others feel shaky: the human emotions in an elderly Roman General Andronicus there is no power, and in his appearance on the stage appears a messenger of Vengeance, capable of anything.

In XVIII-XIX centuries this play was not popular (it even refused to consider Shakespeare), but in 1955, the English Director Peter brook has returned to her place on the stage today, and in 1999 in the film adaptation of Julie Taymor in the title role starred sir Anthony Hopkins.

This play is the deep insight of Shakespeare into the area of Comedy of manners (unlike many of my fellow playwrights, he did not like to make fun of his contemporaries, preferring satire of "happy", a Comedy in the romantic spirit). It is also the only Comedy of Shakespeare, which takes place in provincial England. And only his play, almost entirely written not in verse and prose. Finally, this is one of the few Shakespeare's plays, the plot of which none was borrowed.